Combating Trafficking In Persons in Bangladesh

‘This training helped us understand the role of pro bono lawyers in successfully prosecuting perpetrators of anti-human trafficking laws. I urge fellow participants to keep in mind that, as pro bono lawyers, it is our utmost duty to help those who have suffered untold agony due to being trafficked. Following this training, I hope that we will increase our collective effort to ensure justice for victims of human trafficking,’
Advocate Dil Afroz,
Bangladesh National Women Lawyers’ Association (BNWLA).

iProbono and Winrock International (WI) collaborated to strengthen the capacity of prospective pro bono lawyers at the district level and establish a referral network at the regional level by providing technical support to prepare and deliver training on the legal framework of anti-human trafficking in Bangladesh. 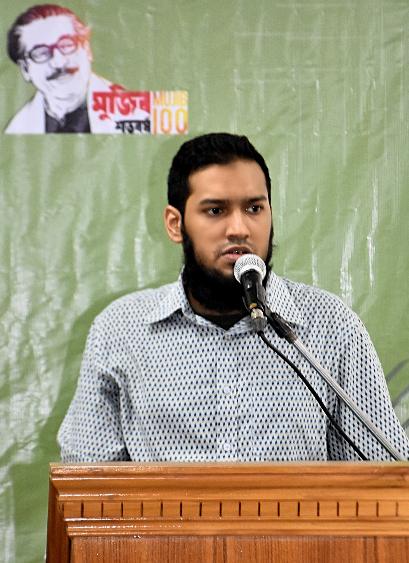 I worked on this project as iProbono’s Program Officer, and I’m sharing this photo story to provide you with a visual overview – from vetting the training manuals to delivering the training programmes to pro bono lawyers across five districts of Bangladesh.

Over the years, Bangladesh has served as both a  source and a destination for human trafficking. This led to Bangladesh enacting comprehensive laws to combat the issue, including –

a) the Prevention and Suppression of Human Trafficking Act, 2012 (PSHTA 2012);
b) the Overseas Employment and Migrants Act, 2013 (OEMA 2013); and
c) ratifying the Protocol to Prevent, Suppress, and Punish Trafficking in Persons, Especially Women and Children 2000 (Palermo Protocol).

Initiation of the Ashshash project

In light of this, WI launched the Ashshash Project to partner with public and private-sector service providers to deliver counselling, legal assistance and economic empowerment support to people who have survived human trafficking. iProbono was an implementation partner to the project along with USAID Asia Counter Trafficking in Persons (Asia CTIP), BNWLA, and The Remedy Project (TRP).

Identification and capacity development of pro bono lawyers is a significant sub-activity under the Ashshash Project, which aims to facilitate capacity building training for prospective pro bono lawyers on PSHTA 2012 and OEMA 2013, including the Rules framed under both laws.

iProbono’s former Senior Program Manager, South Asia, Meenakshi Menon, Senior Legal Officer, Bangladesh, Arpeeta Shams Mizan, and I shared our perspectives on Bangladesh’s legal and institutional frameworks on anti-human trafficking and migrant smuggling with our partners from WI, USAID Asia CTIP and TRP during the consultation process for preparing the training manual. Based on our inputs, TRP developed the training manual consisting of three modules.

Each module also included case studies to assess the trainee’s level of learning at the end of the training. iProbono vetted the draft modules and case studies, provided feedback and approved the revised training manual.

iProbono assisted WI and BNWLA (the legal service delivery partner of the Ashshash project) in identifying potential attendees, and planning, designing and implementing the training programmes.

A session from the training programme in Jashore

Both the training programmes began with the participants filling out a pre-training survey so that we could understand their demographics and existing knowledge of national and international anti-human trafficking legal frameworks. 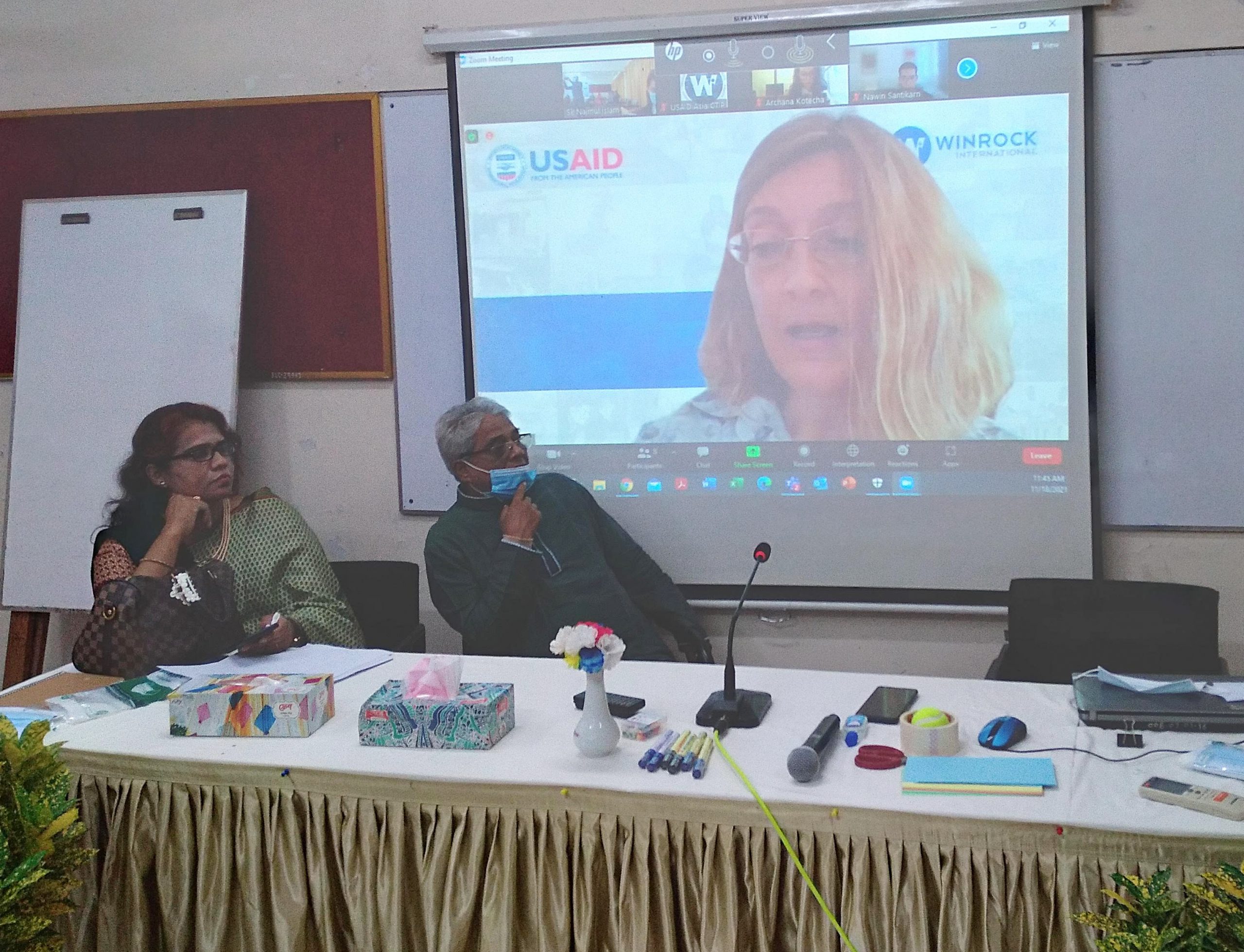 Sara speaking at the inauguration ceremony in Jashore 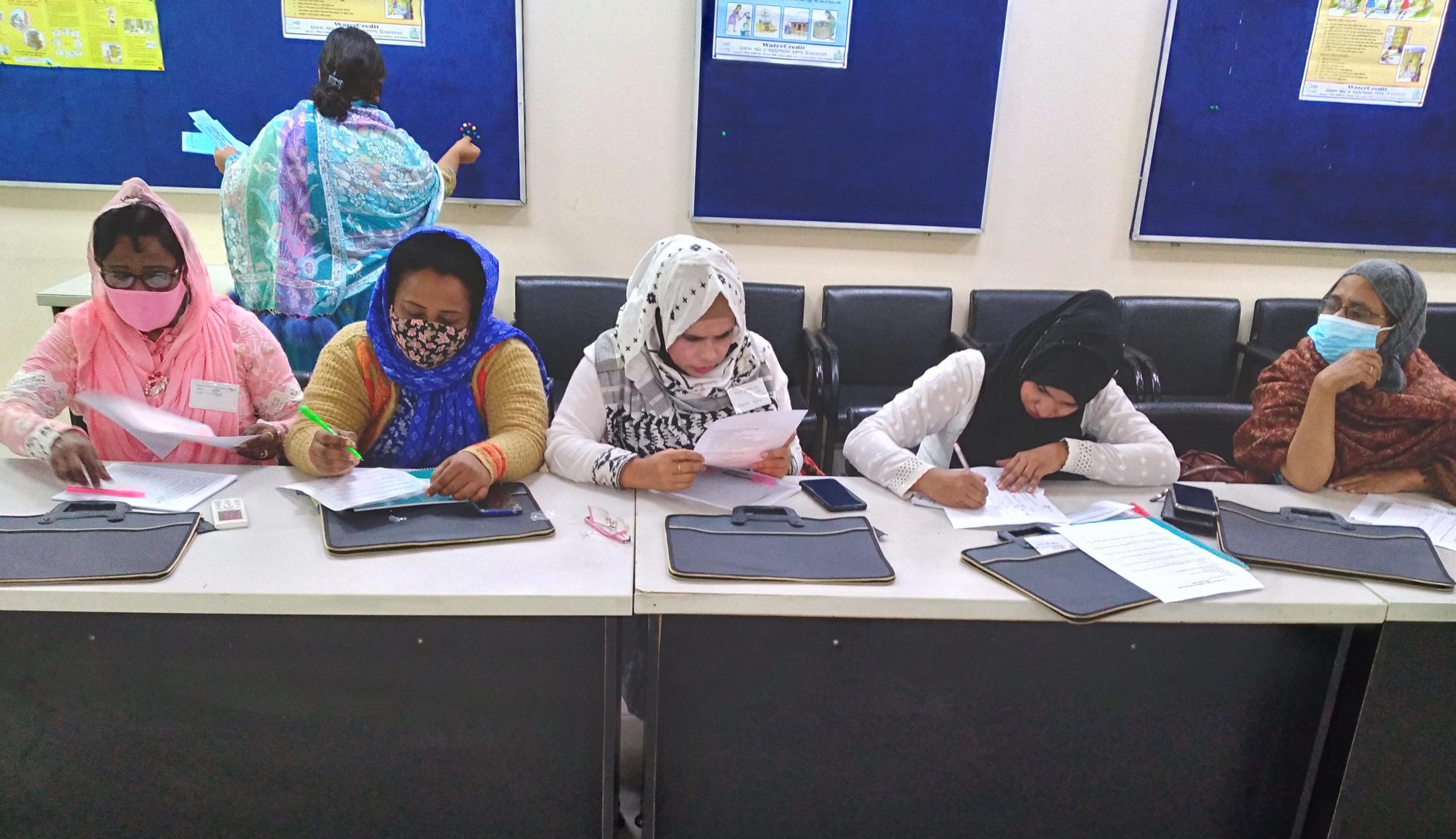 Participants in Chattogram filling up the pre-training survey form

As the facilitators on the ground, Sk. Najmul Islam, Manager, Psychosocial and Legal Services, Ashshash Project, WI, Zannatul Ferdous, Project Coordinator, Ashshash Project, BNWLA, and I summarised the discussions of the trainers in Bangla. We also shared the Bangla version of the presentations with the trainees beforehand. This enabled them to follow along with the speakers during the sessions.

Archana provided a bird’s eye view of the most recent critical global and regional-level data on human trafficking trends and victim profiles. Nawin then focused on the legal definitions of human trafficking, forced labour, slavery, and the methods for distinguishing between them to correctly identify crimes and prosecute perpetrators. 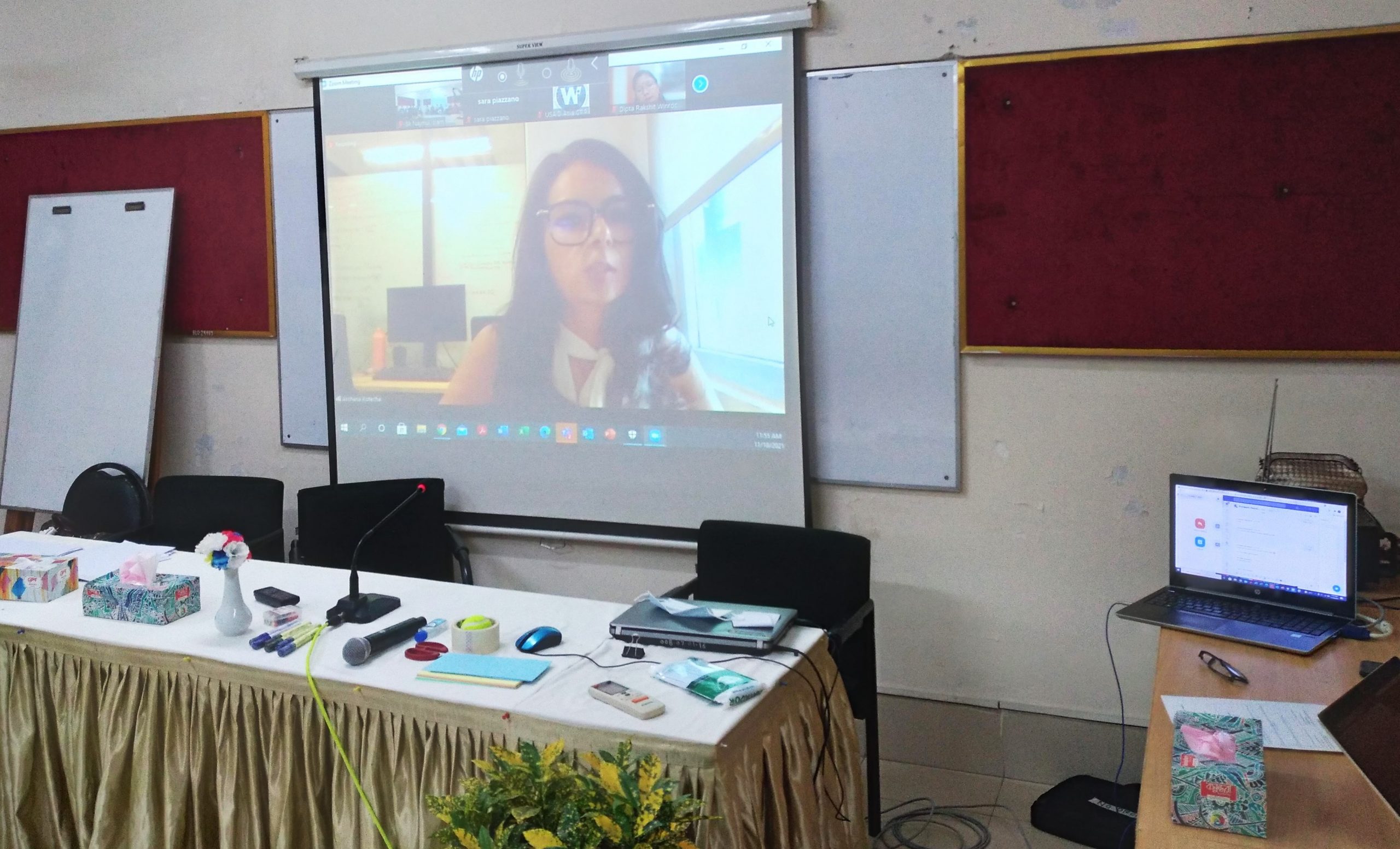 ‘Before delving into the national and international legal frameworks on human trafficking, participants need to understand TIP trends, the general profile of TIP victims and perpetrators, the existing situation in Bangladesh and the risk factors regarding TIP specific to Bangladesh etc.’

Participants engaged with Nawin, asking about his experience dealing with human trafficking and forced labour cases in the United States (US) and Hong Kong (HK). In response, he incorporated a comparative discussion on the legal frameworks in the US and HK into his presentation, giving the participants a global context on the topic. 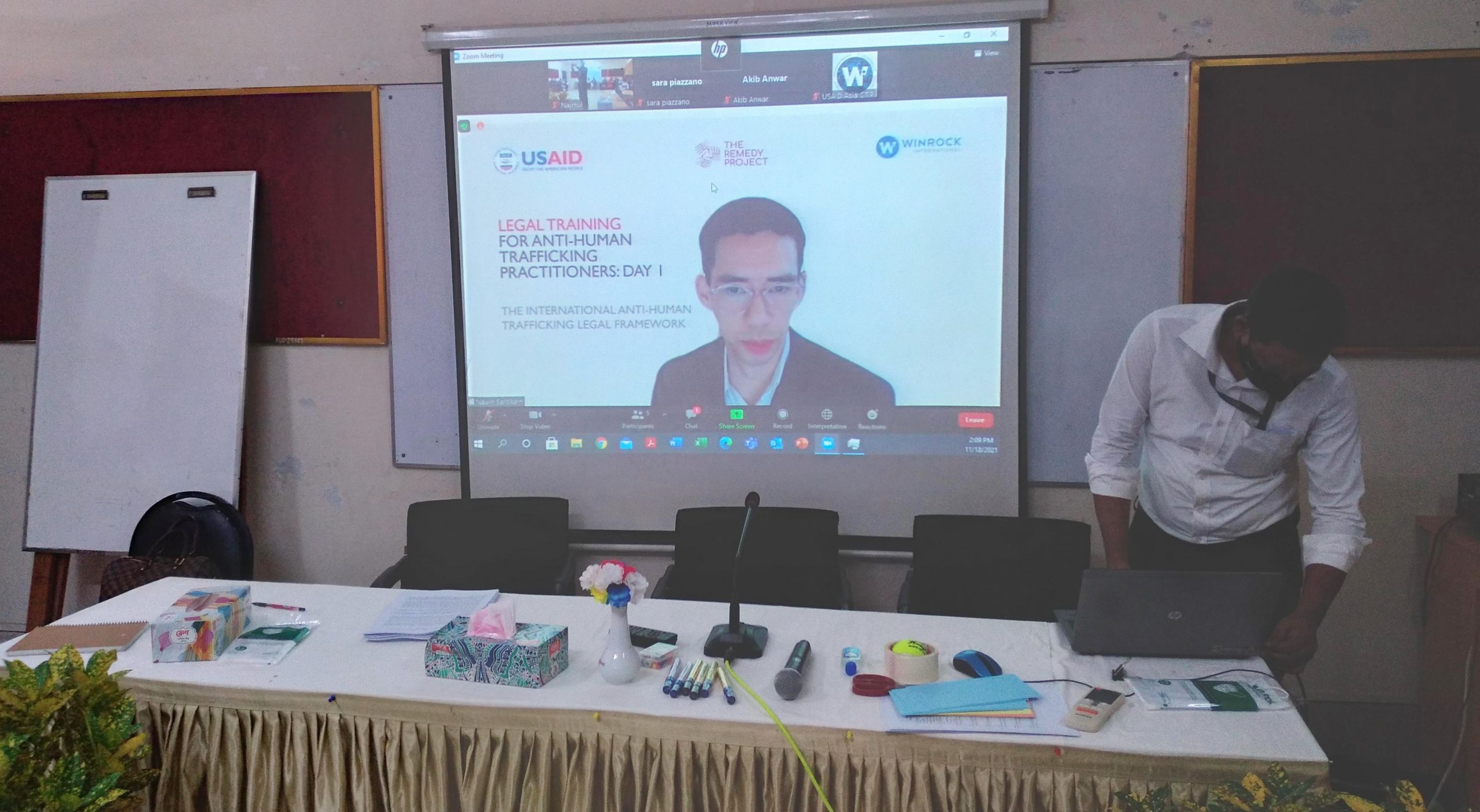 Danette explained the concepts of case typology (CT) and cross-border litigation (CBL) to the participants. As a pro bono lawyer, she believes that there are effective ways to seek justice for one’s clients. This is where CT and CBL aid in shaping the case strategy to map and prosecute other actors involved in human trafficking. 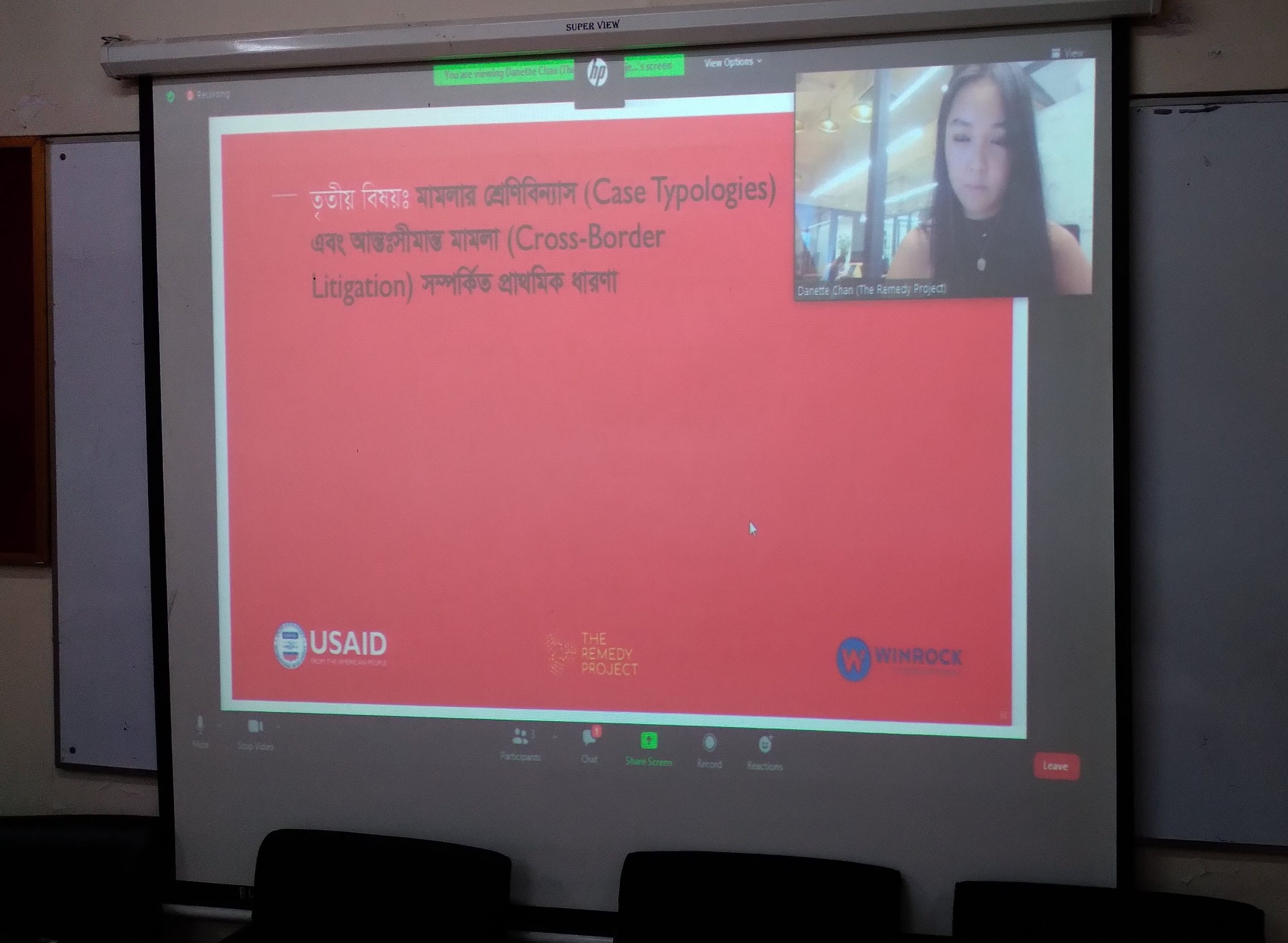 Danette explains the utility of CBL in Bangladesh’s context

Apart from TRP’s sessions, Najmul conducted a session on the legal framework for combating migrant smuggling and the importance of a rights-based approach towards TIP victims.

Participants were shown a puppet show about a human trafficking incident and asked to discuss which of the victims’ rights were violated in the video. This led to a discussion on international standards for the treatment of victims of human trafficking and their foundation in the PSHTA 2012 and the Rules framed thereunder. 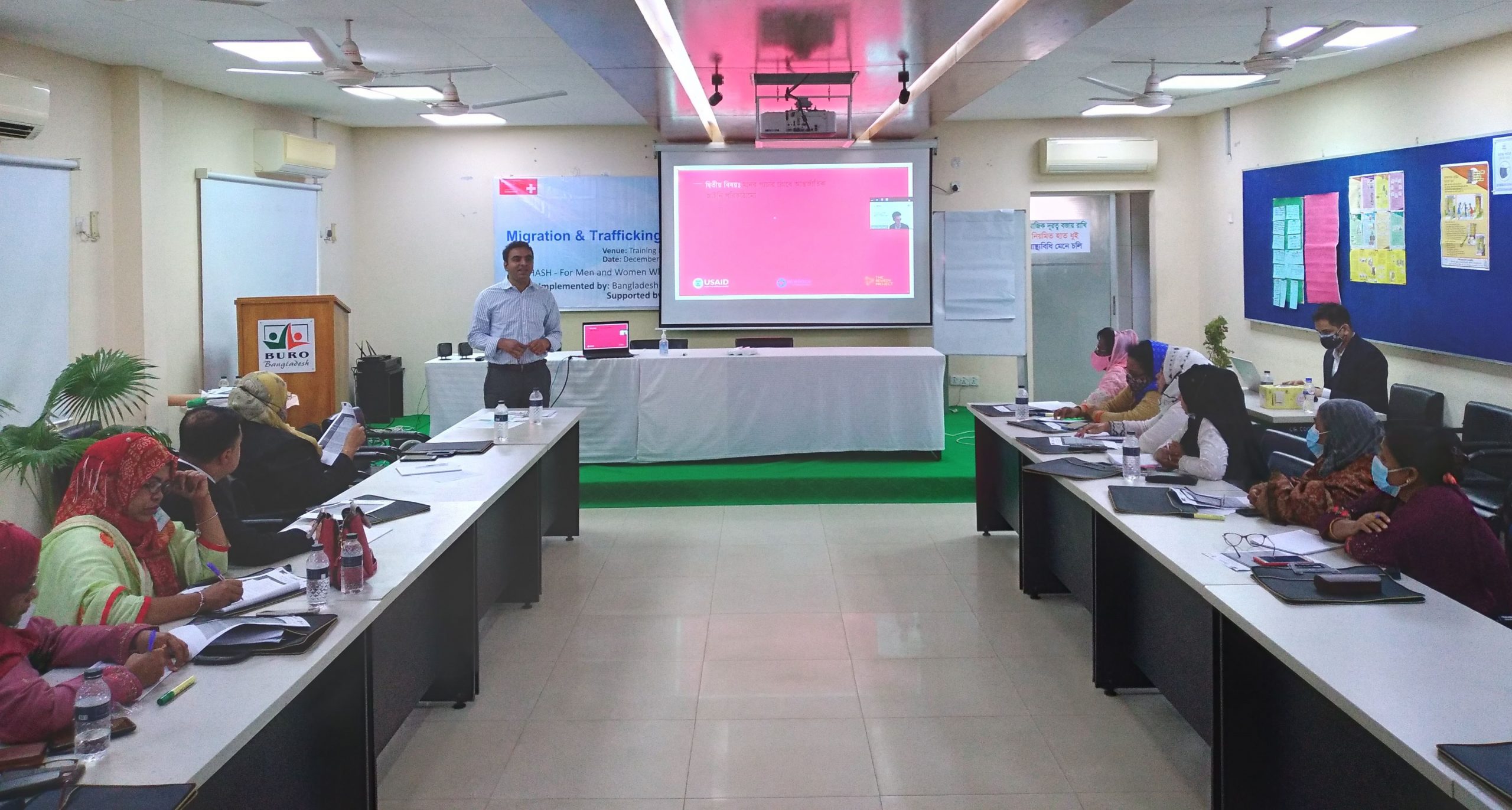 At Chattogram, Najmul presents on the rights of victims as enshrined in the International Bill of Rights

The first day’s discussions laid the foundation for the following days’ sessions focusing on the theoretical and practical aspects of national legal and institutional frameworks for anti-human trafficking.

‘The day’s session (especially the comparative discussion of the international legal standards and the state practices in the US and HK) laid a solid foundation for the upcoming sessions on national legal and institutional frameworks on anti-human trafficking,’ – Advocate Bishojit Bhowmick, Cox’s Bazaar. 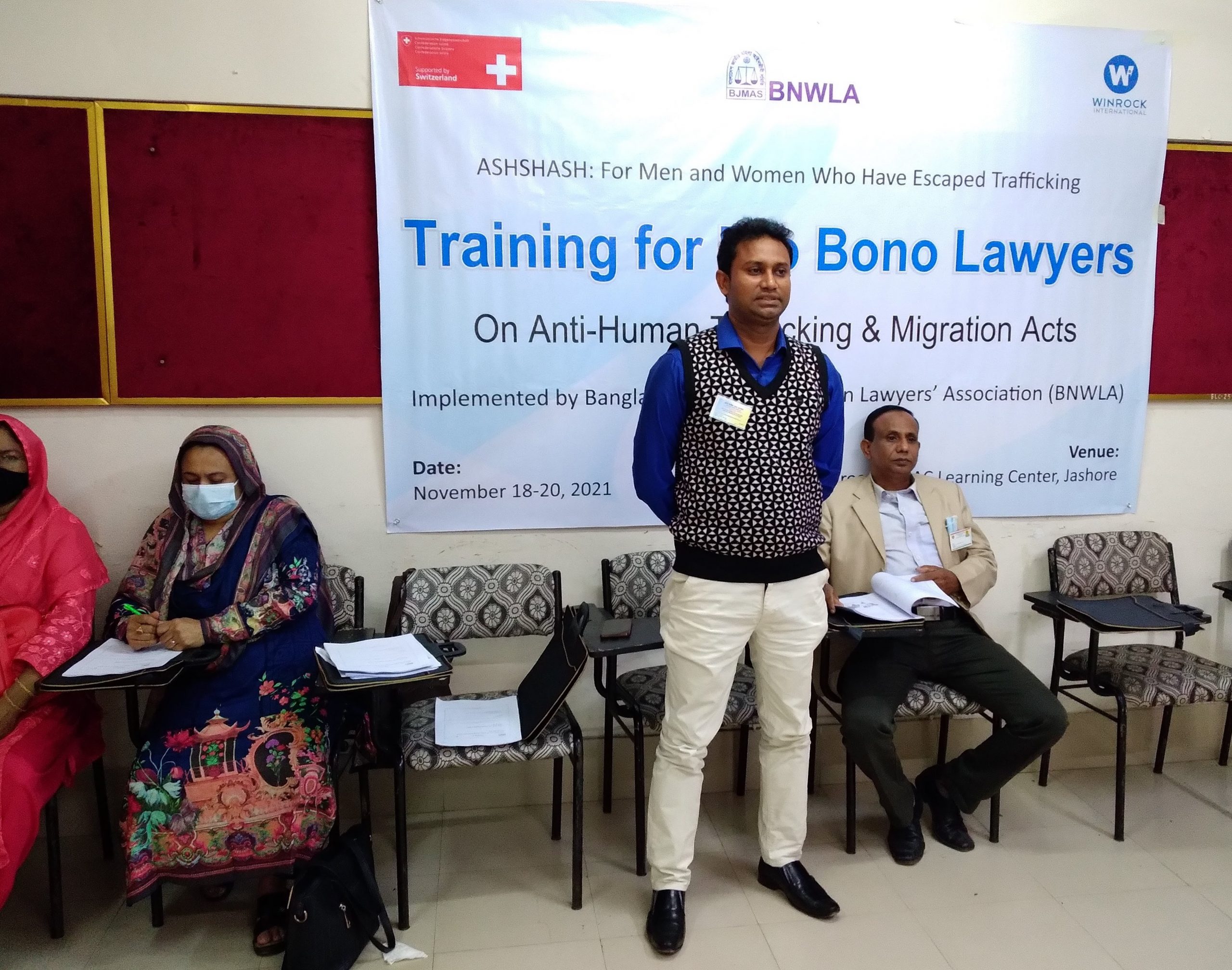 Participants at Jashore share their views on the need for developing a human rights-based approach to combat human trafficking.

Advocate Salma Ali, President, BNWLA, elaborated on the rights and protection measures accorded to trafficking victims under the Constitution and the PSHTA 2012. She emphasised the necessity for increased budgetary allocation, the proactive involvement of law enforcement officials, and an efficient case management system in courts to overcome the implementation challenges under PSHTA 2012. Salma also shared instances from her work rescuing and repatriating victims from Delhi, Mumbai, Kolkata, and other cities in the sub-continent. 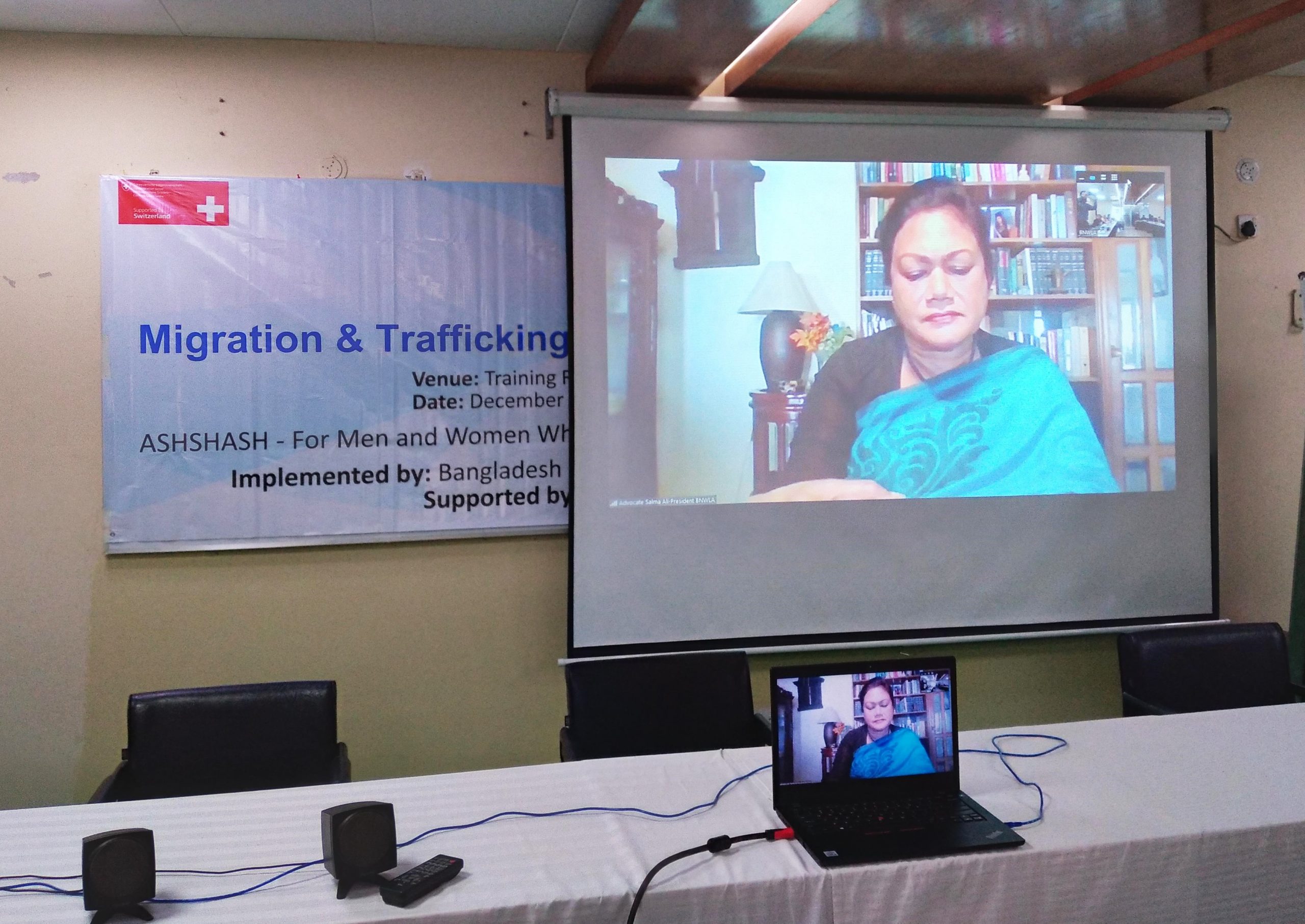 Advocate Salma urges the participants to be well versed in the legal provisions of PSHTA 2012 to uphold the rights of victims and witnesses.

Advocate Nighat Seema, Deputy Director, BNWLA, began this session with a group exercise where participants had to identify the rights of the victims who were infringed and the remedies provided in PSHTA 2012 for such violations. The participants were divided into multiple groups for this purpose and presented their findings to the attendees. 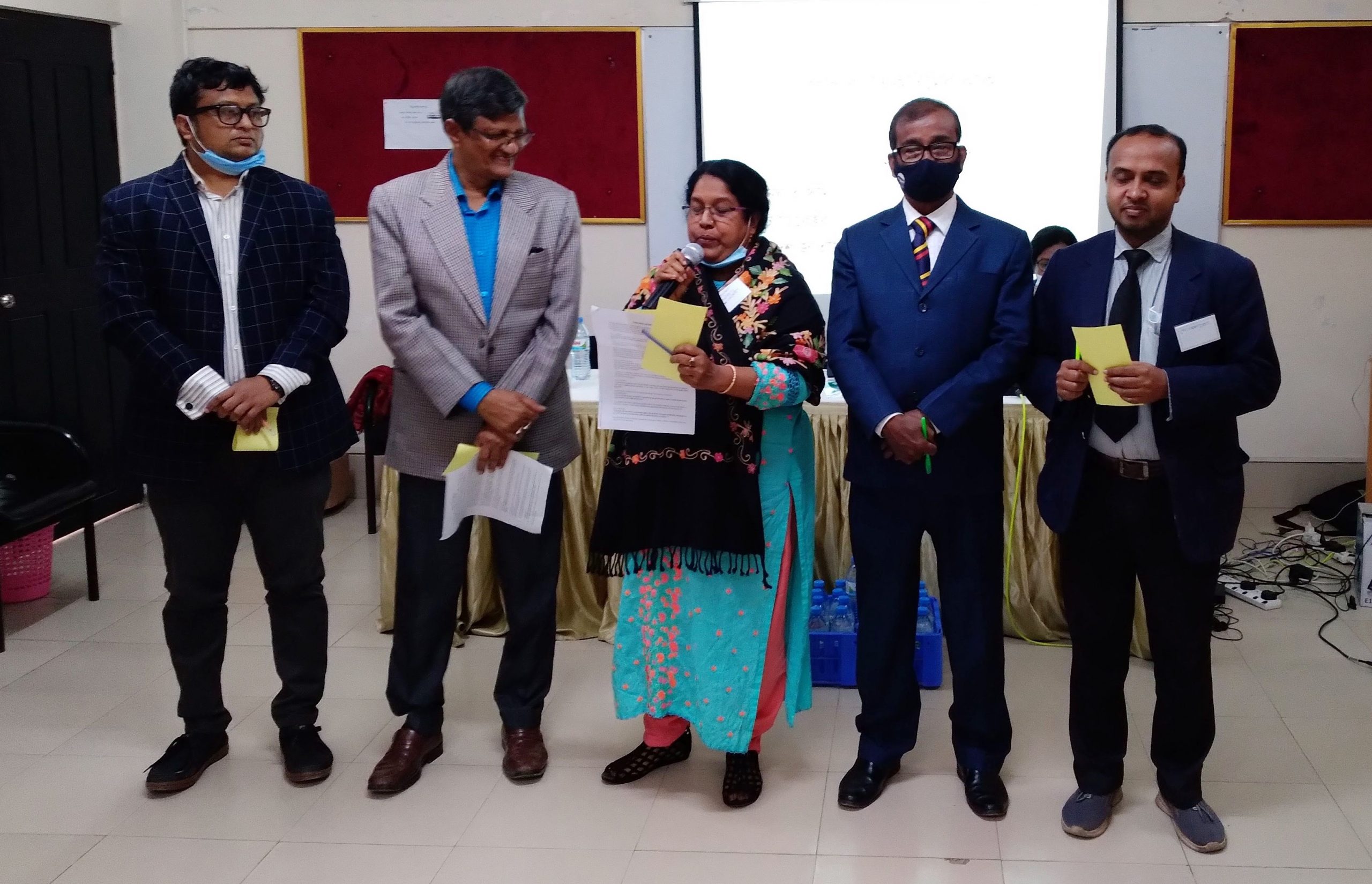 Participants in Jashore present their findings from their case studies on risks faced by trafficking and forced labour victims of Bangladesh.

Following the group activity, Nighat elaborated on why trafficking cases in Bangladesh remain unsolved and perpetrators are not successfully prosecuted. also discussed the legal framework of human trafficking in Bangladesh, both historical and current, and cited landmark judgments on trafficking and commercial sexual exploitation from South Asia. Later, Nafiz went into detail about the enactment of PSHTA 2012 and the challenges to its implementation.

Advocate Salma Ali, President, BNWLA, elaborated on the rights and protection measures accorded to trafficking victims under the Constitution and the PSHTA 2012. She emphasised the necessity for increased budgetary allocation, the proactive involvement of law enforcement officials, and an efficient case management system in courts to overcome the implementation challenges under PSHTA 2012. Salma also shared instances from her work rescuing and repatriating victims from Delhi, Mumbai, Kolkata, and other cities in the sub-continent.

Participants in Chattogram brainstorm on the remedies available to trafficking and forced labour victims under PSHTA 2012.

The participants actively participated by providing recommendations on PSHTA 2012, inquiring about its extraterritorial application and the options to seek compensation through civil proceedings. I answered their queries by citing the specific provisions in PSHTA 2012 on its extraterritorial application, empowering criminal tribunals to order compensation for victims upon successful prosecution of the perpetrators, and enabling victims to file civil suits for compensation and receive financial assistance, etc. 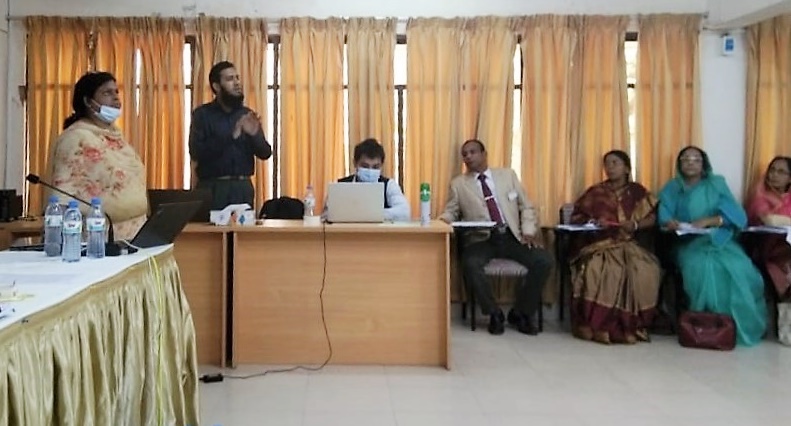 Ali elaborates on the provisions relating to compensation for human trafficking victims in PSHTA 2012 to the participants in Jashore.

With reference to The Lund-London Guidelines, Arpeeta elaborated on the best practices for conducting fact-finding. She covered the essential skills for interviewing TIP victims, including appropriate questioning techniques (open and closed-ended questions, follow-up questions, etc.), and cautioned the participants about some common communication barriers that could jeopardise their interviews. Arpeeta emphasised the importance of using a victim-centric approach while dealing with vulnerable witnesses.

She further added that while pro bono lawyers play a limited role in our criminal justice system, they are critical in ensuring the successful prosecution of perpetrators and justice for victims.

Conclusion of the training programmes

At the conclusion of both the training programmes, the participants filled up a post-training evaluation form. The aim was to assess how well they understood the principles before, during, and after the training. 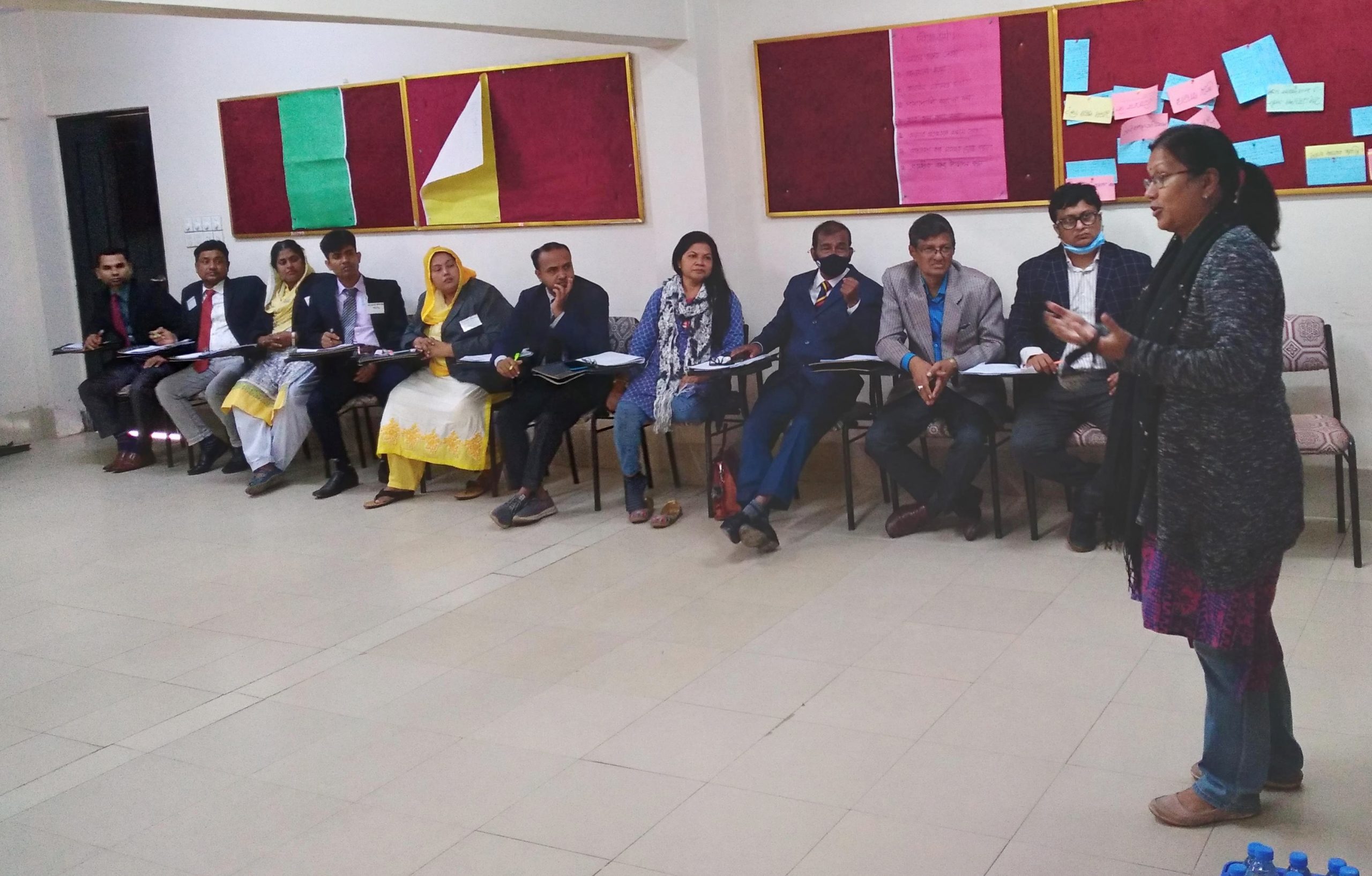 The training helped participants refresh their knowledge of human trafficking and understand the nitty-gritty aspects of the relevant laws.

‘I am delighted to be a part of training where facilitators from other countries have shared their perspectives. We learned about the national and international legal and institutional frameworks for combating human trafficking and migrant smuggling. We also identified the gaps in the laws and the challenges in implementing them. Hopefully, this training will enable us to uphold the rights of people who have been victims of human trafficking,’
Advocate Sheikh Taposee Tohura, Chattogram.

Participants pose for a group photo at the conclusion of the training in Chattogram.

iProbono will participate in mentorship sessions and half-yearly refresher courses for trainees with the project partners in 2022.

For more information on the Ashshash project and our work in Bangladesh, please contact Ali Mashraf, iProbono’s Program Officer, South Asia, at ali.mashraf@i-probono.com.