Meena works as a domestic worker in Banda, Uttar Pradesh. She lost her job during the lockdown. Meena ji says –

“The ration has been vital. I have three children, and we have no money for food. My husband had left me and married someone else. I can’t go to my parents, because they are also very poor and dealing with the crisis too. This food means everything to us.”

In response to the humanitarian crisis unfolding in the aftermath of lockdown, iProbono began a fundraising campaign to support the critical work of our grassroots partners across India who were providing emergency relief to people who were unable to access a healthy meal on a day-to-day basis. We are deeply grateful to our partners on the ground and to all those who contributed to the campaign, with special thanks to The Uttarayan Fund and GMSP Foundation for their support.

Where has relief been distributed?
Since March we have watched the crisis unfold, on the streets and in the news. iProbono funded 30 groups – including partner organisations, our fieldworkers, volunteer networks – to provide cooked food and dry rations to almost 140,000 people, for periods ranging between 14 to 84 days, roughly the equivalent of around 5,968,000 meals. The distribution spanned 89 districts, and 16 States and Union Territories. Many of our partners were the first responders to the crisis, and have been working on relief since the beginning of the lockdown.

Several of our partners are also implementing programs for access to work and shelter, emergency health support, and bringing greater accountability into public distribution, in order to make the food relief initiatives sustainable for these vulnerable households in the long-term. Providing funds for food relief enables them to free up resources for these other essential supporting initiatives. 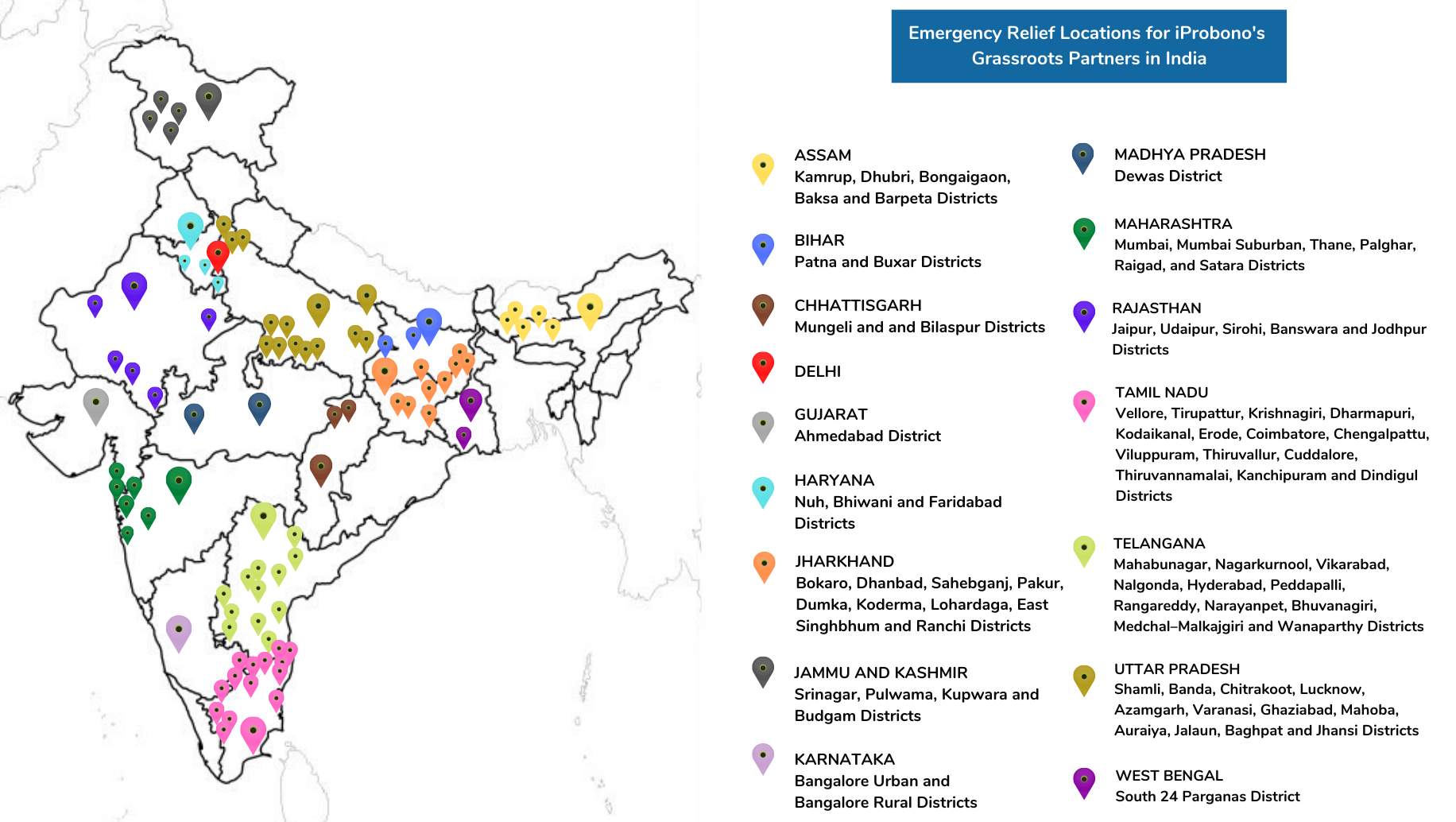 How were individuals and communities identified?
In conjunction with our partners, we identified where distribution is required based on three overlapping areas of need:

1. Populations not covered by the government-run Public Distribution System, in particular in States with large returning migrant populations.

Jan Sahas, which works on the rights of excluded communities, has provided relief based on distress calls being received on their helplines from construction workers, domestic workers and other daily wage earners in Delhi and the Bundelkhand region of Uttar Pradesh. 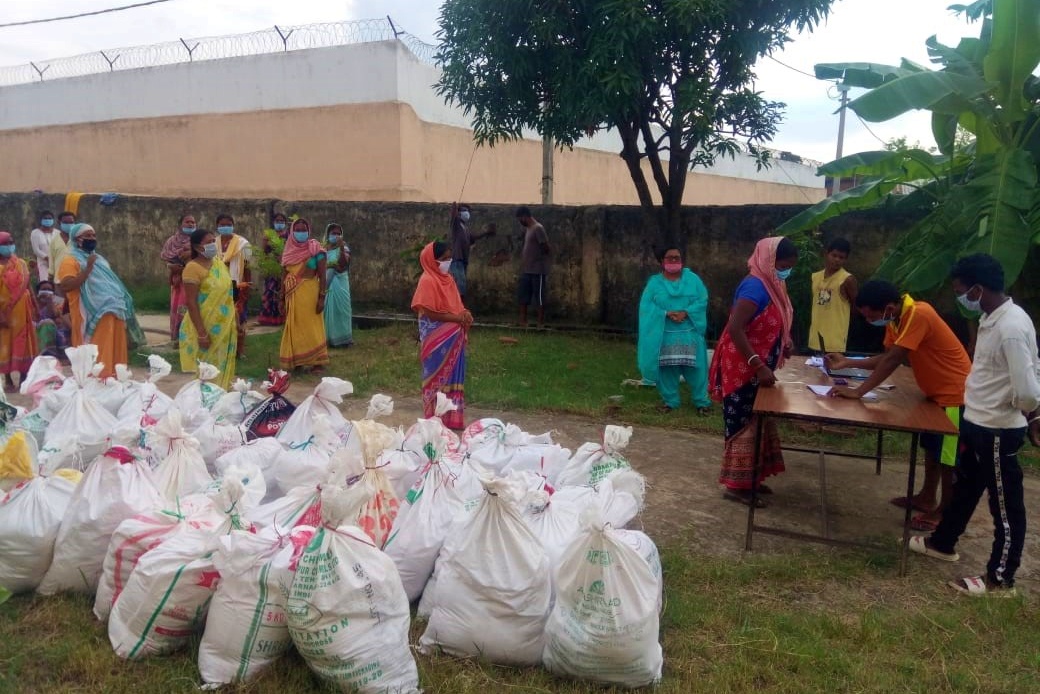 
2. Vulnerable populations typically excluded from access to food, who were already living on the edge prior to the lockdown, including single women-headed households, adolescent girls in both rural and urban contexts, workers freed from bonded labour, sex-workers, the homeless, the elderly, disabled people, adivasi or tribal communities, and those otherwise excluded due to their caste or religion.

Organisations include: Foundation for Sustainable Development (Tamil Nadu and Telangana), Jai Bhim Rajasthan (Rajasthan), a group of schools in Tamil Nadu, and a team of lawyers and paralegals in Assam.

Ration distribution by Foundation for Sustainable Development in Krishnagiri District, on the border of Tamil Nadu and Karnataka.

Volunteers have reached up to 600 disadvantaged households in the Sunderbans across the South 24 Parganas District including single women-headed families, daily wage earners, and domestic workers. 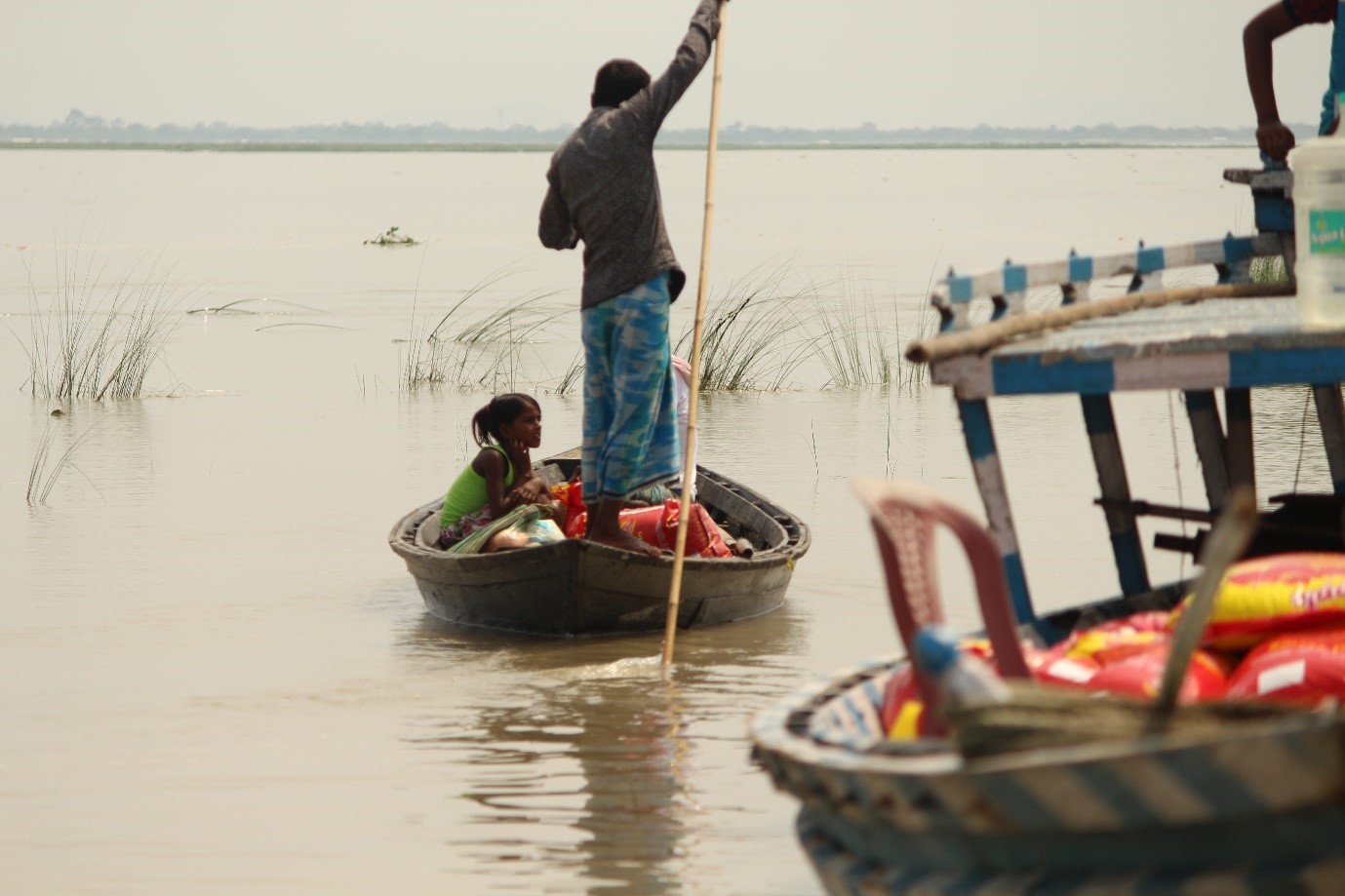 Distribution to families in Morichakandi, on the Char Islands in the Brahmaputra river, in Barpeta District in Assam.

An interview with a woman resident of a village in Char

How many members do you have in your family?
– Six.

What is the means of your livelihood?
– Agriculture.

What are the problems/challenges you faced during the lockdown?
– My husband and I could not go to the market to sell the goods we usually do so that we could bring something for our children to eat. There were days we had to starve and under such conditions, we spent our days.

How do you arrange food for the children?
– Somehow we tried to provide them food, and at times we had to make them understand that we could not provide food to them. We could sometimes arrange rice for one meal a day but could not arrange any vegetables.

Did you sell any animals like cattle, goats etc. during this lockdown?
– No, we could not sell anything due to closure of the market.

What are the challenges you faced during the flood?
– We could not go elsewhere as we do not have a boat. There is no doctor, no medicine. We had no toilet, bathroom or water pump. Everything was inundated under water. We also had no access to clean drinking water.

What are the conditions of cultivation – is everything under water?
– Everything is under water.

Could you harvest the rice?
– No, we could not.

How much land is under water?
– Six bighas (roughly 2.4 acres)

What are your next steps for your livelihood?
– Only God knows how we will survive in this period.

Would you like to add anything?
– We could not buy anything, so it is a relief to have gotten these food materials. I am really thankful to you.

3. Communities in urban areas, including those living in informal settlements, homeless shelters, and on construction sites, where the wide gaps in food security have been critical.

SNEHA (Society for Nutrition, Education, Health and Action) has reached over 8500 individuals in urban slum communities in Mumbai including daily wage earners, pregnant and anaemic women, malnourished children and adolescents. 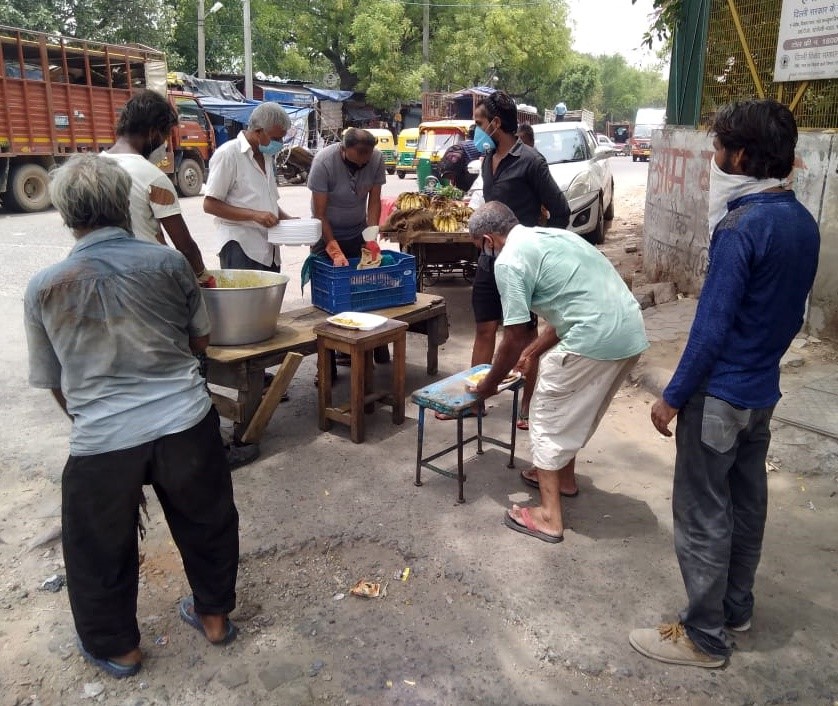 Mumtaz has been working as a helper in one of the many steel factories that make up the Wazirpur Industrial Area in Delhi for the last 10 years. He had this to say about the Workers’ Dhaba initiative that has been sustaining workers like him during the lockdown:

Mumtaz has six family members and when work is regular, earns INR 7,500 (GBP 80) every month. His work has resumed, but activity is low. His factory employed 20 people in the past but now employs only five. Despite his work having started Mumtaz volunteers his time at the Mazdoor Dhaba.

What are our next steps?
Our partners are now implementing programs for livelihood regeneration, emergency health support, and bringing greater accountability into public distribution, so that food relief initiatives are just a stop-gap towards sustainable solutions.

We have identified areas of both short and long-term advocacy needs, including wage security, access to entitlements and a wide array of issues under social protection. For example, in Jharkhand, we are collaborating with a network of organisations to help workers access public schemes to meet urgent needs.

By helping people through this crisis, we have the opportunity to identify and address systemic inequalities, to help distribute resources more fairly, to see communities build resilience and, we hope, to realise a more just society.

To learn more about the condition of workers including migrants across the country during this time, and possible re-imaginings of the future, please read:

Unlocking the Urban: Reimagining Migrant Lives in Cities Post-COVID 19 by the Aajeevika Bureau

Labouring Lives: Hunger, Precarity and Despair amid Lockdown by the Centre for Equity Studies in collaboration with the Delhi Research Group and Karwaan-e-Mohabbat