The second wave of COVID-19 in March 2021 in India, a year after the first major wave, overwhelmed the healthcare system, resulting in devastating shortages of drugs, hospital beds and oxygen. According to BBC News, the country recorded approximately 26 million COVID-19 cases during the second wave, and is the third in the world to record more than 300,000 deaths behind the United States and Brazil.[1]

“We have been hearing about the horrors of this disease. I don’t know what to do. We have no access to a hospital close to us and no way to access oxygen if my family needs it. I am also out of work.”

Through a dedicated fundraising campaign, iProbono continues to extend support to grassroot partners and organisations. The campaign serves people who live with great precarity, acutely affected by the aftermath of the second phase of the COVID-19 lockdown, and face severe food insecurity. Since April 2020, iProbono has supported over 35 groups – including partner organisations, fieldworkers, and volunteer networks by providing cooked food and dry rations to almost 190,000 people, for periods ranging between 14 to 84 days, which is roughly the equivalent of around 8,700,000 meals.

With the second phase of the distribution, from March and June 2021, the efforts extended to 91 districts, 16 States and Union Territories, and support to three new partners. The number of people reached in this phase of funding was 45,420 individuals, for periods ranging between 14 to 84 days, roughly the equivalent of 2,722,950 meals. In addition, iProbono supported the distribution of 1000 health kits, 1000 mosquito nets and 400 supplementary nutrition kits. 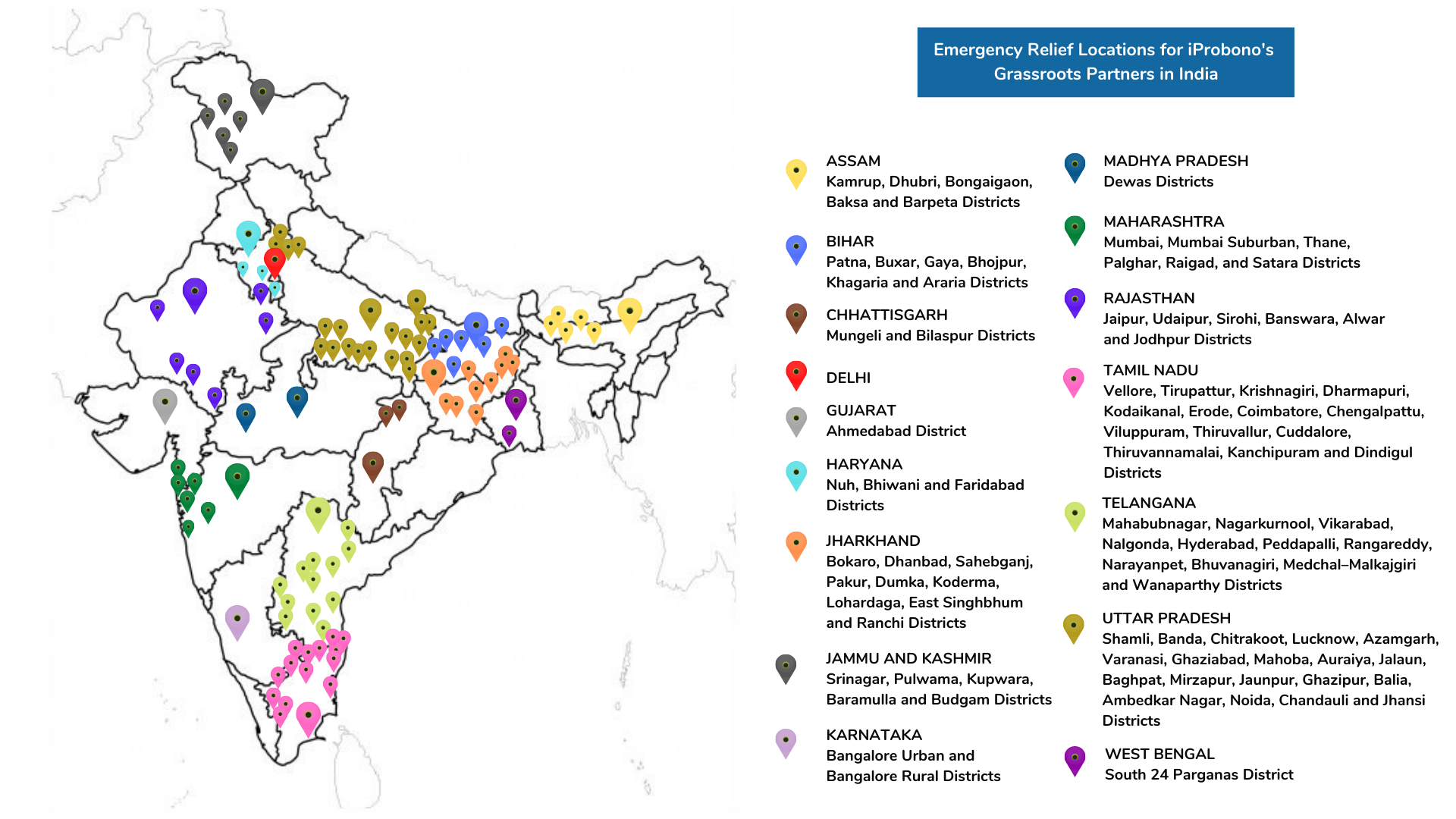 iProbono identified the individuals and communities in need based on three broad areas:

Aman Prayas reached approximately 6,750 individuals including disadvantaged tribal families from the Santhal tribe, the Oraon Tribe, and the Sauria Paharias (who are a Particularly Vulnerable Tribal Group or PVTG). We also reached disadvantaged populations from the muslim community, pregnant and lactating women, adolescent girls, and other disadvantaged low-income groups across three districts in Jharkhand. 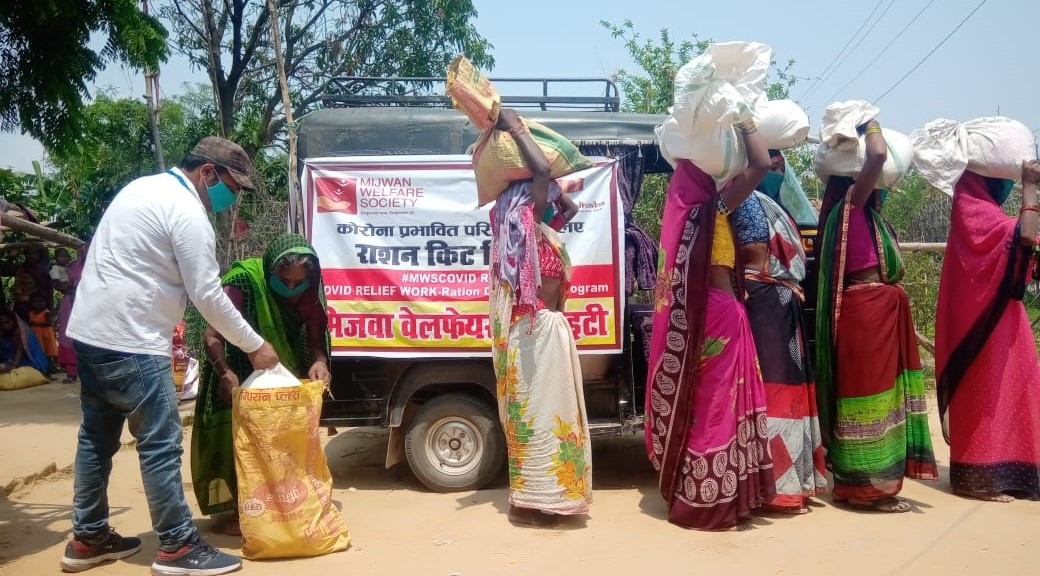 Mijwan Welfare Society facilitated distributions across eight districts in Uttar Pradesh to households of migrant workers, tribal communities who earn a living by selling disposable plates made out of leaves, and other disadvantaged low-income groups like Dalits from the Musahar Community, known as the rat-eaters, who continue to catch rats for a living due to destitution and poverty.

“I have a daughter and son and have no access to work and no money. No one else has come to help us. I will need more ration going forward. During this lockdown, my son had to eat salt with bread to fill his stomach.”

2. Vulnerable populations typically excluded from access to food: This includes those who were already living on the edge prior to the lockdown, including daily wage earners, single women-headed households, adolescent girls in both rural and urban contexts, workers freed from bonded labour, sex-workers, the homeless, the elderly, persons with disability, tribal communities, and those otherwise excluded due to their caste or religion. To reach these groups, iProbono worked with Foundation for Sustainable Development based in Telangana and Tamil Nadu, Help Foundation in Jammu and Kashmir, and SAPNA based in Delhi, Uttar Pradesh and Rajasthan.

In this phase of distribution, Foundation for Sustainable Development reached over 8,890 construction workers, migrant workers, domestic workers, survivors of bonded labour and elderly tribal labourers across Tamil Nadu and Telangana.

One of the people reached in the distribution was Nida Afaq Bhat, who is 30 years old. Nida suffers from lung cancer. She has been married for two years but her husband abandoned her following the diagnosis of her illness. Her financial condition is precarious — she cannot work very much due to her deteriorating health. 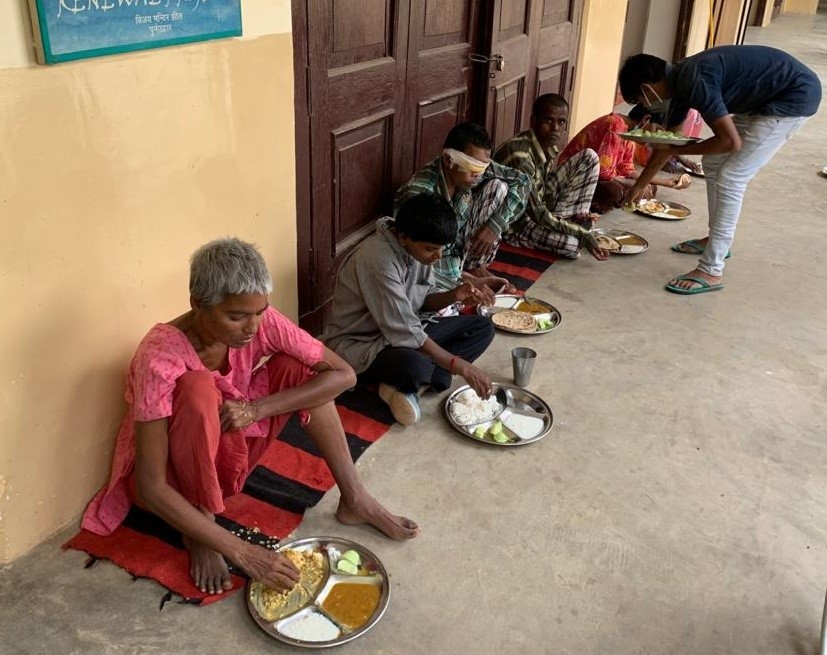 Distribution of cooked food by Sapna at Anandam, Vijay Mandir – a home for the homeless in Alwar, Rajasthan.

3. Communities in urban areas, including those living in informal settlements, homeless shelters, and construction sites. Our partners included Centre for Health and Resource Management (CHARM) and Koshish Charitable Trust, both based in Bihar. 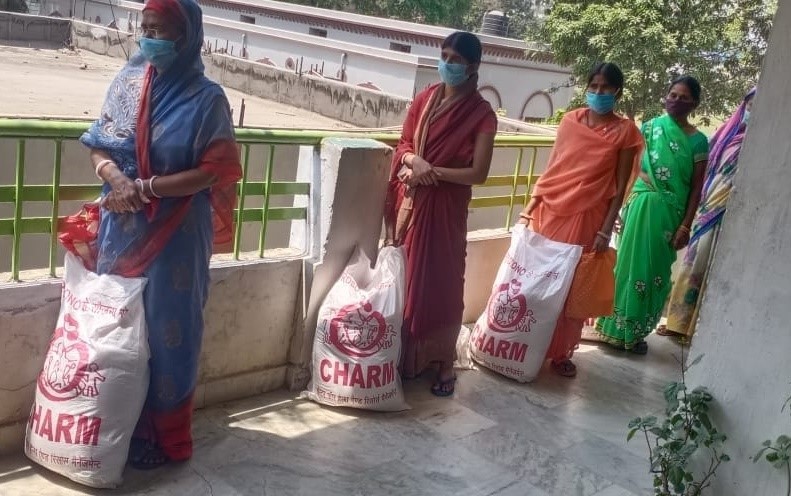 “I am a resident of Gausnagar, Patna and my family consists of three children, my husband and I. During the lockdown, my husband lost his job as a daily wage earner in Kolkata and returned to Patna. We had no ration and faced a lot of difficulties to procure food for our children.”

We are working with our grassroots partners to ensure the highest levels of accountability in food relief distribution. Alongside the food relief campaign, iProbono is in the process of identifying areas of both short and long-term advocacy needs that partners are engaged with including wage security and an array of issues under social protection. In Jharkhand, we collaborated with a network of organisations to link over 80 workers and their families across 12 districts to social protection schemes with urgency. More recently, we are developing plans to pilot rural and urban legal advice centres with our partners in Uttar Pradesh and Rajasthan.

Several of our partners are implementing programmes for livelihood regeneration, access to shelter, emergency health support, and bringing greater accountability into public distribution, in order to make the food relief initiatives sustainable for these vulnerable households in the long term. Providing funds for food relief enables them to free up resources for these essential supporting initiatives.