Bonded labour in India — A myth or reality?

Early this year, a horrifying incident was reported from Guna district in Madhya Pradesh where labourers were made to pick coins out of hot oil as punishment when they spilled some liquid jaggery that they were preparing. They worked in their employers’ fields for which they received two meals a day, and INR 25,000 once a year. One of the victims, Raju Sahariya said that those labourers who refused to pick out the coins were beaten. As soon as the incident was reported, authorities rushed to the spot and rescued 16 people including eleven minors and five women. It is important to note that all those rescued were bonded labourers working below minimum wage and not allowed to take leave. This is one of those stories on the bonded labour system that makes me think about how we as a society have become so apathetic to the misery and suffering that many hapless victims suffer with nothing to fall back on.

India’s Supreme Court recently pulled up the Bihar and Uttar Pradesh governments, pointing out their delay in implementing the National Human Rights Commission’s order to rescue and repatriate 187 bonded labourers working in brick kilns across the two states.

We live in the 21st century, when the term ‘slavery’ might sound like a traditional or outdated concept. Early sources suggest that slavery has existed across the world for centuries. It is a state in which one human being is controlled by another human being. In reality, even in this modern world, there are millions of people — including adults and children — trapped in slavery in many countries around the world.

In India, slavery has persisted for centuries, and despite efforts to outlaw it, it continues in its incarnated forms. The paradox for us is that despite having comprehensive laws to prevent slavery, we are home to the world’s largest number of slaves.[1] Millions of people including children are trapped in child labour, domestic servitude, sex trafficking, forced begging, etc. In Hindi, bonded labour is known as ‘bandhua mazdoori’. It is very surprising that the elimination of bonded labour was once among the top priorities of states but is now barely discussed in public policy statements or discourse.

According to the Global Slavery Index 2018 report, there are 8 million people living in ‘modern slavery’ in India and there were 6.1 victims for every thousand people. The facts and figures on this scourge are a matter of deep concern. Earlier this year, the Ministry of Home Affairs wrote to the government of Punjab about farmers working in bondage in border villages, based on the Border Security Force’s report. Based on data from the pandemic, there is a report which shows how the COVID-19 pandemic has intensified the problem of bonded labour.[2] Based on the report, the Center has recently written to all states to keep a check on the practice of bonded labour.

Do you think the bonded labour system is a myth?

Before moving forward, we need to understand what the bonded labour system is.

The bonded labour system is the most extensive form of slavery in the world today. It is also commonly known as debt bondage and is an oppressive form of forced labour.[3] While bonded labour can take different forms, debt bondage is a system in which a labourer offers services to repay a debt to the creditor or employer, for no remuneration. The conditions in which a labourer provides their services under this system are inhuman, and the reimbursement of the debt is made practically impossible by the creditor.

From a historical perspective, bonded labour in India has its roots in ancient times. In the present day, India continues to have an inequitable social structure based on a deeply rooted caste system which has led to cementification of pre-existing social differences and further marginalisation of those who are already vulnerable groups. Based on reports, those who end up in the vicious cycle of bonded labour mostly come from subordinate castes and ethnic groups.

In the past, bonded labour was associated with the agricultural sector in rural areas, but at present, bonded labour operates in both rural and urban pockets in unorganized industries such as brick kilns, the bangle industry, agriculture, stone quarries, coal mining, construction work, silk industries, carpet industries and beedi making industries.[4]

People mostly from vulnerable communities within the Scheduled Tribes and Scheduled Castes from distress prone regions of Uttar Pradesh, Bihar, Jharkhand, Odisha, Chhattisgarh, Maharashtra, Madhya Pradesh, Telangana, and Andhra Pradesh are lured with petty sums and the promise of a better life to work in labour-intensive units where they are treated inhumanely.

What Does the Law Say?

The Bonded Labour System has been ‘abolished’ in India by the Bonded Labour Abolition Act, 1976 (hereinafter referred to as BLSA). Article 23 of the Constitution of India also prohibits forms of forced labour and human trafficking at large. The law makes the practice of bondage a cognizable offence punishable by law. As per Section 2(g) of the BLSA, a bonded labourer is defined as someone who has entered into an agreement and provides labour under forced circumstances. When the labourer forfeits any one of the following rights: (1) minimum wage (2) fundamental right of movement, (3) right to employment, or (4) right to sell his/her product at market price is considered as ‘bonded labour’. The most common features of bonded labour cases established in courts are no leaves even if sick, long working hours, unhygienic living conditions, restricted movement, physical assault, and no minimum wage. All these are gross violations of human rights.

Statistics on Bonded Labour in India

According to data shared by the Ministry of Labour and Employment in the Lok Sabha on ‘the number of bonded labourers identified and released in different states in 2018’, approximately 3,13,687 bonded labourers were identified and rehabilitated in that year. However, data on prosecution of offenders is not as easily available or reported. Reports of labour departments from states like Uttar Pradesh and Tamil Nadu regarding Section 21 of the BLSA which deals with offences to be tried by an executive magistrate show high pendency rates and very few convictions. The National Crime Records Bureau (NCRB) has been publishing data on BLSA offences since 2014. According to this, there were only 4 convictions each in 2015 and 2016. Additionally, over 77 per cent cases ended in acquittal for those years.[5]

Why Does the Bonded Labour System Still Prevail?

Based on the studies done on bonded labour in India, poverty and caste are two common features of the bonded labour system in India in addition to lack of education, lack of awareness among officials, and people about relevant laws, official apathy, and power imbalances between the employers and the labourers.

The government too acknowledges that the roots of the problem lie in socio-economic inequities. In 2017, Bandaru Dattatreya, ex-Union Minister of State for Labour and Employment and currently serving Governor of Haryana, stated that “Bonded labour today has camouflaged, changed in form into different forms of slavery. We have adequate laws and policies to tackle the issue of the Bonded Labour System but to eradicate this scourge, we must change the psyche of the society and feudal thinking of people, which unfortunately still persist”.

But we also observe a lack of sensitivity, knowledge, awareness and will among public officials to deal with the issue of bonded labour. This creates an obstacle on the way to the rehabilitation of these bonded labour. The rescued labourers are entitled to various benefits under Central Sector Scheme 2016 (CSS) which include immediate financial assistance, release certificate, final compensation, and many other aftercare benefits. The journey of rehabilitation of bonded labourers is, however, not as easy and smooth as it looks on paper. For instance, rescued labourers are mandated to receive a state-issued release certificate (RC), which makes them eligible for the rehabilitation measures, but often, getting these RCs becomes enormously difficult, creating a major impediment to accessing entitlements.

Another area that requires attention is full compensation to these victims. The Act says that full compensation can be given after conviction of the employer/alleged offender under a summary trial to be completed within three months by an executive magistrate. But the fact remains that the summary trials are not taking place as they should.

With everything we have discussed, do you think the bonded labour system still exists? When we as a country dream of becoming a strong, prosperous and inclusive society, can we ignore a significant part of our society which struggles daily for their biological survival and has nothing to fall back on? Despite laws and policies in place, do we have a strong and effective implementation system to fight this social scourge? Do we have other solutions? The aim of this blog is not only to present questions in the reader’s mind but to start a dialogue.

In the end, I’ll draw your attention toward this powerful image that speaks for itself — a rescued bonded labour who fell at the feet of the rescue team when they reached the woodcutting unit in Kancheepuram, Tamil Nadu. 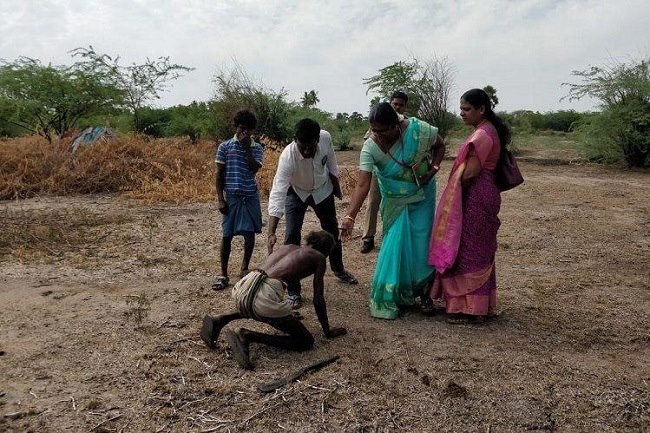 [1] Global Slavery Index 2018, available at https://www.globalslaveryindex.org/2018/findings/country-studies/india/ Last seen on 24/11/2020
[2] Chandrima Banerjee, ‘In year of Covid, why bonded labour would rather stay ‘bonded’, available at https://timesofindia.indiatimes.com/india/in-year-of-covid-why-bonded-labour-would-rather-stay-bonded/articleshow/82196735.cms, last seen on 10/10/2021
[3] Any work done by a person not out of his own will but out of force and compulsion is regarded as forced labour. Read Section 374 of Indian Penal Code, 1860.
[4] Shivnarayan Rajpurohit, ‘Torn between poverty and bonded labour, these children find no solace in-laws either’ available at https://indianexpress.com/article/india/bonded-child-labour-law-poverty-7434769/ last seen on 06/08/2021
[5] Madhuri Xalxo, ‘Adivasis and the Indian State: Tribal groups particularly vulnerable to bonded labour, strict enforcement needed to prevent exploitation’ available at https://www.firstpost.com/india/adivasis-and-the-indian-state-tribal-groups-particularly-vulnerable-to-bonded-labour-strict-enforcement-needed-to-prevent-exploitation-7257231.html last seen on 06/08/2020